Every year around 65,000 horses are transported long-distances across Europe in appalling conditions to be slaughtered. Horses suffer injury, dehydration, disease, exhaustion and untold stress during these needless journeys. In the main these horses are sourced from countries including Poland, Spain, France and Hungary, and by far the majority are destined for Italy. On these journeys they pass many slaughterhouses licensed for horses; one commonly used route passes 180 slaughterhouses that could take these horses. World Horse Welfare is campaigning for a short finite journey limit to be introduced to stop this totally needless suffering.

Jo has developed the charity’s strategy and approach to this campaign over the last ten years, to ensure that it is based upon sound, well researched evidence; which is then utilised to develop the case and recommendations for change. She has been involved in every element of the campaign, from evidence collection and engaging public support, to pressing the Commission for positive change. This approach has led to the charity being viewed as an expert and authority on this subject, leading to positive success including the introduction of welfare improvements into legislation (EU Council Regulation (EC) No 1/2005 on the Protection of Animals during Transport) for horses transported for slaughter. 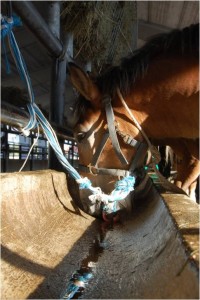